The Sri Sudarshana Ashtakam mantra is a powerful prayer in reverence to Lord Sudarshana. Sudarshana is considered as the main weapon of Lord Vishnu.

It is the holy chakra armed by Lord Vishnu which had its own consciousness.

Lord Sudarshana is also known as 'Hatharaja', or the king of weapons.

The composition is attributed to Vedanta Desikan, born as Venkata Natha, and is still played every morning at temples across India.

Sudarshanashtakam is part of the Ancient Chants from India - Volume 1 album.

According to Hindu mythology, Viswakarma, the God of architecture caged the sun and churned excess heat.

With this heat, he created three weapons: The Trishoola, Shakti, and the Sudarshana chakra.

These three weapons belonged to three Devas. The Trishoola (trident) is the weapon of Lord Shiva. Shakti is the tool of Subramanya.

The Sudarshana chakra is the weapon of Lord Vishnu. The weapon is worshipped by the Trimurti: Brahma, Vishnu, and Shiva.

Swami Desikan composed the Sri Sudarshanashtakam in Sanskrit when there was an epidemic in Thiruvahindrapuram.

This stotram helped the village get rid of the disease. Since then, many have listened to this mantra to get rid of fever and other illnesses.

The mantra is believed to always protect righteous people and also provides everyone the wealth of salvation. 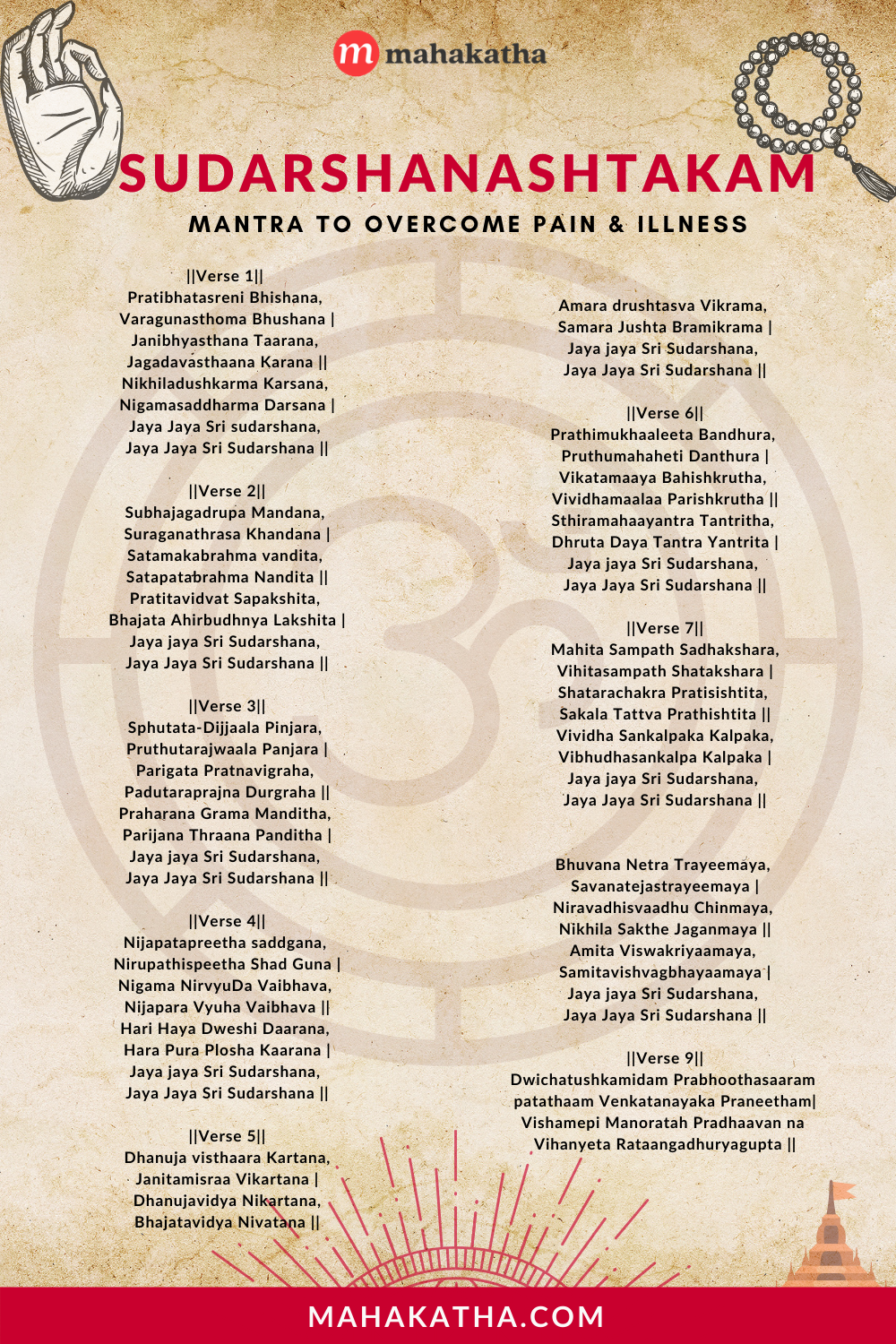 The Sri Sudarshanashtakam is an ode to the powers of Lord Sudarshana, the leader of all weapons.

Each of the eight verses of the Shri Sudarshana Ashtakam describes the various powers of the Sudarshana and prays to bless us with them to fulfill our wishes and desires.

The Sudarshana chakra is not merely a weapon to destroy evil.

It is also a weapon that would not tolerate any injustice: be it done by Asuras towards Devas or done by Devas who wrong their devotees.

The might of Sudarshana chakra can be put in context when you notice that even Lord Shiva, the ultimate destroyer of evil, worships it.

Verse 1 :
Pratibhatasreni Bhishana, Varagunasthoma Bhushana
Janibhyasthana Taarana, Jagadavasthaana Karana
Nikhiladushkarma Karsana, Nigamasaddharma Darsana
Jaya Jaya Sri sudarshana, Jaya Jaya Sri Sudarshana
~
Meaning :
Victory and Victory to you, oh, Sudarshana,
Victory and Victory to you, oh, Sudarshana,
The one, who is the fierce enemy of those who wrongs his devotees
The one, who is like a jewel for all those who do good deeds,
The none, who helps man get across the deep and volatile sea of materialistic life,
The master, who perfectly stabilizes the entire universe,
The one, who eliminates all the wrongdoings and sins,
The one, who teaches us righteous conduct.
Hail to that divine Sudarshana, Hail to that divine Sudarshana

Verse 4 :
Nijapatapreetha saddgana, Nirupathispeetha Shad Guna
Nigama NirvyuDa Vaibhava, Nijapara Vyuha Vaibhava
Hari Haya Dweshi Daarana, Hara Pura Plosha Kaarana
Jaya jaya Sri Sudarshana, Jaya Jaya Sri Sudarshana
**
~
**Meaning :
The one, who is forever with those who are righteous,
The one, who is home to the six divine traits of God,
These traits are jñānam (wisdom), aiśvarya, (wealth and beauty), Śakti, (divine power), Bala, (physical strength), vīrya, (valor), Tejas. (radiance)
The Sudarshana chakra is believed to have these same characteristics, like his master Lord Vishnu.
The one, who is the protector of Lord Indra himself, who worships you,
Hail to that divine Sudarshana, Hail to that divine Sudarshana

Verse 5 :
Dhanuja visthaara Kartana, Janitamisraa Vikartana
Dhanujavidya Nikartana, Bhajatavidya Nivatana,
Amara drushtasva Vikrama, Samara Jushta Bramikrama
Jaya jaya Sri Sudarshana, Jaya Jaya Sri Sudarshana
~
Meaning :
The one who destroys the spread of demons or asuras to their roots,
The one who takes away the sorrows of birth, aging and death,
The one who wins over the slyest of deceptions,
Who removes the false knowledge from the minds of devotees,
Whose heroism and valor has been praised by all blessed celestial beings,
And who can move in any direction, in any way, to destroy enemies and overcome hurdles

Verse 6 :
Prathimukhaaleeta Bandhura, Pruthumahaheti Danthura
Vikatamaaya Bahishkrutha, Vividhamaalaa Parishkrutha,
Sthiramahaayantra Tantritha, Dhruta Daya Tantra Yantrita
Jaya jaya Sri Sudarshana, Jaya Jaya Sri Sudarshana
~
Meaning :
The one who has a rapid and dynamic gait
Whose movements are pleasing to witness
The one who holds the most powerful weapons in his hand
And can outsmart the opponent in every tactic of war,
He who is adorned with the most beautiful garlands,
He who is full of mercy and blessings for devotees,
Devotees who worship him through his symbol ‘yantra’ and sacred chants ‘mantra.’
Hail to that divine Sudarshana, Hail to that divine Sudarshana

Verse 7 :
Mahita Sampath Sadhakshara,Vihitasampath Shatakshara
Shatarachakra Pratisishtita, Sakala Tattva Prathishtita,
Vividha Sankalpaka Kalpaka,Vibhudhasankalpa Kalpaka
Jaya jaya Sri Sudarshana, Jaya Jaya Sri Sudarshana
~
Meaning :
The one who chants your mantra is blessed with salvation,
The one who chants your name is blessed with wealth and prosperity
The one whose symbol has six sacred corners
The one who is a form that embodies all knowledge
The one who manifests every intention of his own
And the one who is like the miraculous wish-fulfilling tree for his devotees

Verse 8 :
Bhuvana Netra Trayeemaya, Savanatejastrayeemaya
Niravadhisvaadhu Chinmaya, Nikhila Sakthe Jaganmaya,
Amita Viswakriyaamaya, Samitavishvagbhayaamaya
Jaya jaya Sri Sudarshana, Jaya Jaya Sri Sudarshana
~
Meaning :
The one who is a form of the three Vedas,
Who is the form of the three holy fires,
Who is true, eternal knowledge,
Who contains the power of the universe,
Who accomplishes the most difficult noble deeds,
And the one who ends all the fears of the universe.
Hail to that divine Sudarshana, Hail to that divine Sudarshana


When listened to with devotion this mantra our deepest wishes will be manifested. And all obstacles will be eliminated. The Shri Sudarshana Ashtakam will grant us all the bounty of a healthy and prosperous life.

Benefits of listening to Sudarshanashtakam mantra

The Shri Sudarshana Ashtakam mantra invokes Lord Sudarshana and asks for a blessing of his powers.

Benefit 1 - Physical healing
The Shri Sudarshana Ashtakam has the power to heal you physically as well as mentally, and removes pain

These are the primary benefits of the Sudarshanashtakam. It is also known for its ability to rejuvenate your body.

Here's a preview of the Sudarshanashtakam mantra, from our YouTube channel

Sudarshanashtakam is a great mantra to help you heal from mental and physical illness.