Learn everything about this mantra that is known to help you remove obstacles from your life.

The Pranamya Shirasa Devam mantra is a solemn prayer to Lord Ganesha.

It invokes Ganesha, the god of auspiciousness and success. Ganesha is also known as the remover of all obstacles or Vighnaharta.

Chanting or listening to Pranamya Shirasa Devam mantra helps you to overcome any hurdles that come in your way.

The mantra has the power to channel our inner devotion, dedication, and intention to get out of any difficult situation.

The mantra also has the power to bless one with long life and prosperity. We, at Mahakatha, have brought this mantra to life through our Ancient Chants album.

Pranamya Shirasa Devam is part of the Ancient Chants from India - Volume 1 album.

This Ganesh Stotram is found in the Narada Purana.

It offers praise to Lord Ganesha, traditionally considered to be the remover of obstacles in Hindu mythology.

This is why Lord Ganesha is worshipped at the beginning of every auspicious occasion. 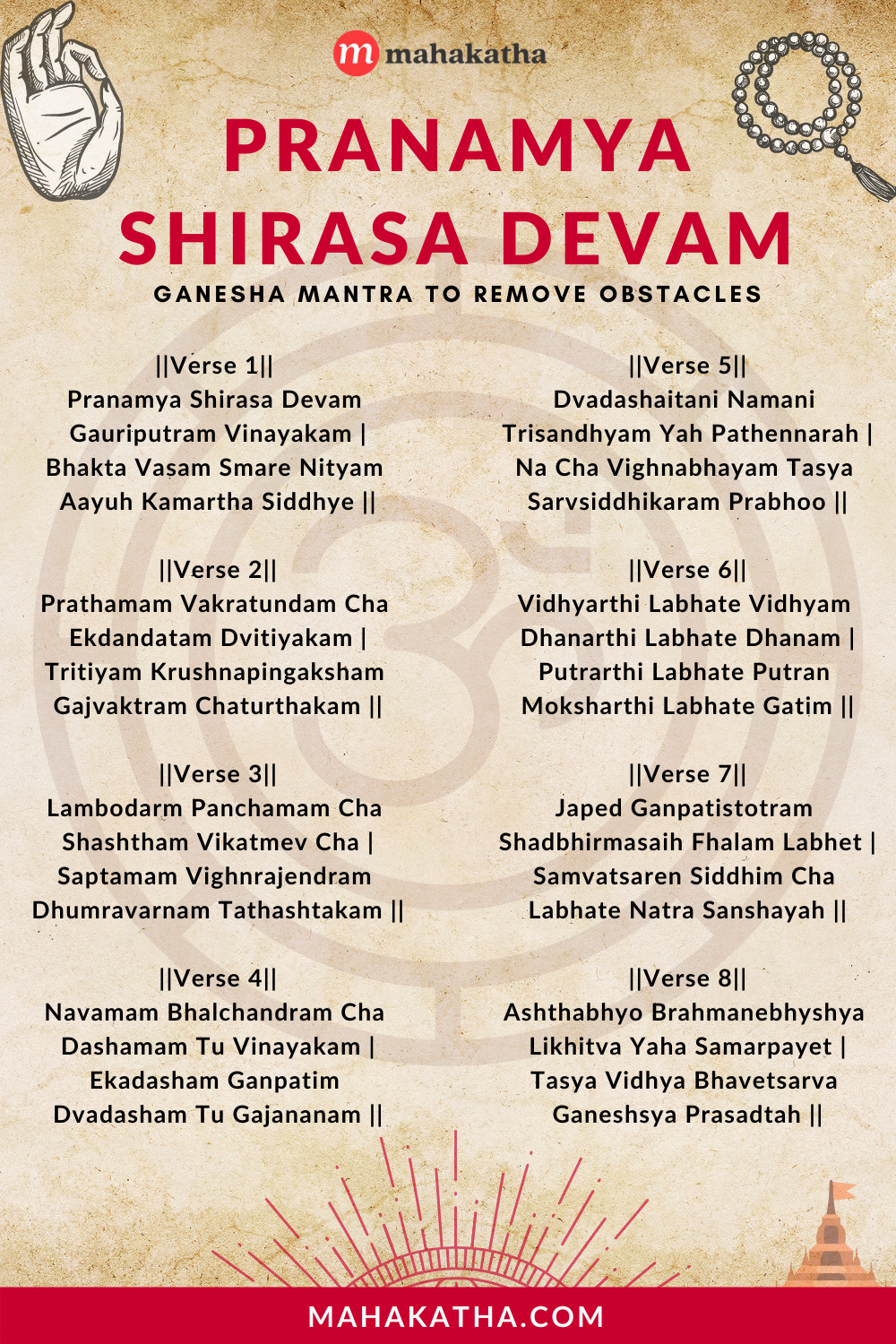 Verse 1 :
Pranamya Shirasa Devam Gauriputram Vinayakam
Bhakta Vasam Smare Nityam Aayuh Kamartha Siddhye
~
Meaning :
I bow to Lord Ganesha, the son of Gauri and the Alleviator of all obstacles
I surrender as I invoke many magnificent identities with devotion,
I seek the power of this mantra to bless me with a long life full of manifested
desires.

Verse 2 :
Prathamam Vakratundam Cha Ekdandatam Dvitiyakam
Tritiyam Krushnapingaksham Gajvaktram Chaturthakam
~
Meaning :
The first identity: the One with a curved trunk, Second: the One with a broken tusk, Third: the One with beautiful eyes of black, brown and red, Fourth: the one with a gigantic form.

Verse 3 :
Lambodaram Panchamam Cha Shashtham Vikatmev Cha
Saptamam Vighnrajendram Dhumravarnam Tathashtakam
~
Meaning :
The fifth identity, the One with a large belly, symbolizing prosperity, the Sixth: the One who crushes evil, Seventh: the One who removes all obstacles and suffering, Eighth: the One whose body is of the color of smoke.

Verse 4 :
Navamam Bhalchandram Cha Dashamam Tu Vinayakam
Ekadasham Ganpatim Dvadasham Tu Gajananam
~
Meaning :
The ninth identity: the One with a beautiful crescent on his head, Tenth: the One who ends all suffering, Eleventh: the Fierce Leader of Lord Shiva’s army, and Twelfth: the One with an elephant’s face.

Verse 5 :
Dvadashaitani Namani Trisandhyam Yah Pathennarah
Na Cha Vighnabhayam Tasya Sarvsiddhikaram Prabhoo
~
Meaning :
Anyone who surrenders to Lord Ganesha with complete devotion, and practices this mantra three times a day,
And remembers all His 12 identities, will gain the power to achieve any wish, banish fear, and overcome hurdles.

Verse 7 :
Japed Ganpatistotram Shadbhirmasaih Fhalam Labhet
Samvatsaren Siddhim Cha Labhate Natra Sanshayah
~
Meaning :
The lives of those who practice this mantra regularly will begin to change in 6 months, and in a year, all their desires will be manifested without a doubt.

Verse 8 :
Ashthabhyo Brahmanebhyshya Likhitva Yaha Samarpayet
Tasya Vidhya Bhavetsarva Ganeshsya Prasadtah
~
Meaning :
The one who shares this mantra in writing to eight wise people as an offering to Lord Ganesha will be blessed with abundance by Lord Ganesha.

The Pranamya Shirasa Devam Mantra invokes Lord Ganesha who is the remover of obstacles and provider of wealth and prosperity.

Here's a preview of the Pranamya Shirasa Devam Mantra, from our YouTube channel

Pranamya Shirasa Devam is a Ganesha mantra that helps you overcome obstacles.