Learn everything about this universal mantra that is known to heal you physically and mentally.

Om is one of the oldest mantras mainly used in Hindu traditions and Buddhist practices. It is a monosyllable mantra composing three root sounds: A, U, and M.

It is considered to be the sound of the Universe. Om serves as an independent mantra and is also placed at the beginning of other crucial mantras.

In both philosophies, Buddhism and Hinduism, Aum or Om is considered holy and sacred. The sound represents existence and consciousness as a whole.

Om is also called the Pranava, meaning the life-force mantra. Other names for the universal mantra Om are:

The first mention of Om was found in the Vedic texts, Upanishads, from India.

In Hinduism, Om signifies Atman, meaning soul, and Brahman, meaning the universe and everything it holds.

In Buddhism, Om is considered as the composition of three pure sounds A U M. The representation of these three root basic sounds is of dual nature.

According to the 14th Dalai Lama, the three sounds symbolize the impure body, speech, and mind of the regular practitioner.

Simultaneously, they also signify the elevated body, speech, and mind of the enlightened Buddha.

So, the Om mantra chant encompasses everything between the impure Bodhisattva and the Enlightened Buddha. 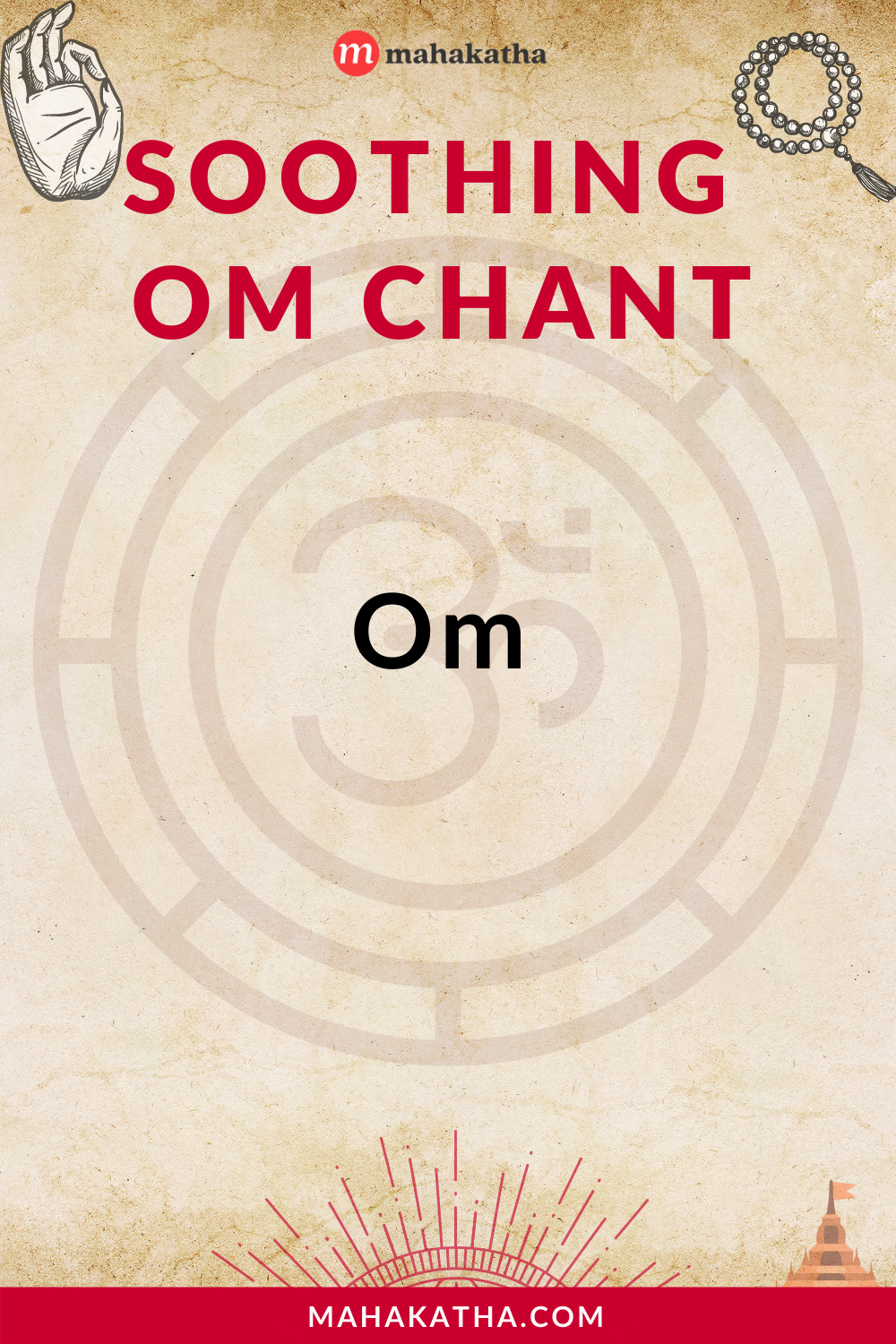 Many Sanskrit texts from India recommend chanting Om daily. In Hinduism, it is believed that Om is a sacred sound. It is the essence of Brahman, meaning life, and Atman, meaning consciousness.

The Om mantra is a primordial sound and so, it is also known as the Shabda-Brahman, meaning the ultimate reality decrypted in sound.

The Om sound is also illustrated with the Om symbol. This symbol is also found whenever the word is mentioned in Sanskrit.

The symbol is a composite of five symbols: four curves and one circle or point.

The four curves represent the different states of consciousness. The circle/point represents the greatest version of self.

This is when we use all our five senses.

The third curve stems from the common point of the waking and sleeping states. This represents the state of dreaming where you are neither unconscious nor awake.

The detached semicircle forms the fourth curve. It represents ‘Maya‘, which means the illusion of life. It sits between the consciousness and the circle that represents Samadhi.

The circle of Samadhi is a representation of the absolute truth. It is the purest form of self and divinity.

The symbol of Om can be seen in the beginning and end of chapters of the Vedas, the Upanishads, and other Hindu scriptures.

Om is chanted at every ceremony and ritual in Hindu tradition including weddings, housewarming, and even funerals.

Benefits of listening to Om chant

The Om mantra invokes the ultimate power of the universe.

Benefit 1 - Deep connection
Chanting or listening to Om creates a deeper connection with our subconscious mind.

Benefit 2 - Restore Balance
Om restores the balance in your mind and helps you to access your purpose in life.

Benefit 3 - Greater healing
The mantra has the ability to heal your physical and mental afflictions.

Benefit 5 - Reduces stress
It regulates the stress hormone cortisol and keeps unwanted stress and anxiety away.

Benefit 6 - Better sleep
The mantra also regulates the production of Melatonin which corrects your sleeping patterns and boosts immunity.

Here's a preview of the Om chant, from our YouTube channel